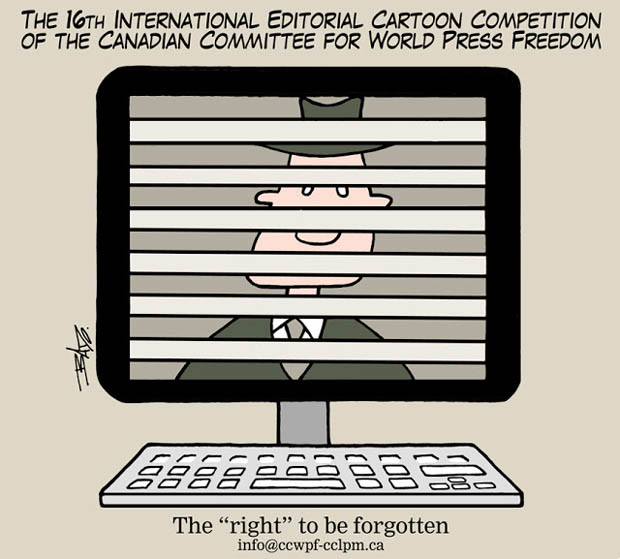 Here are the rules and regulations:
1. The theme for the 16th International Editorial Cartoon Competition is:The “right” to be forgottenIn a 2014 decision by the Court of Justice of the European Union, a Spanish lawyer was granted the right to have a previous brush with justice deleted from Google search on his name.
While protection of one’s privacy is an essential right, erasing public records could have untold consequences.
Could this decision jeopardize the reliability of the Internet and make research by journalists and historians impossible?
Could this precedent lead to the breakdown of the Internet and the creation of national networks vulnerable to state censorship?

2. Prizes: three prizes will be given: a first prize of $1000 plus a Certificate from Canadian UNESCO, second and third prizes of $500. All sums are in Canadian dollars. Ten additional cartoons will receive an ‘Award of Excellence,’ Regrettably no financial remuneration accompanies the Awards of Excellence.

3. Only one cartoon will be accepted from each cartoonist. It may be either in color or black and white and must not have won an award.

5. The name, address, telephone number and a short biography of the cartoonist must be included in the submission.

7. The winners of the Cartoon Competition will be announced at the World Press Freedom Day Luncheon held at the Chateau Laurier in Ottawa, Canada on Tuesday May 3, 2016 as well as being advised by e-mail. The winner’s names and their cartoons will be posted on the CCWFP web site.8. The winning cartoons will be exhibited at the luncheon.The deadline for receipt of cartoons is 5 p.m. GMT, Friday, April 1, 2016.

Send submissions by e-mail to : info@ccwpf-cclpm.ca

Cartoons should be in jpeg format at 300 dpi