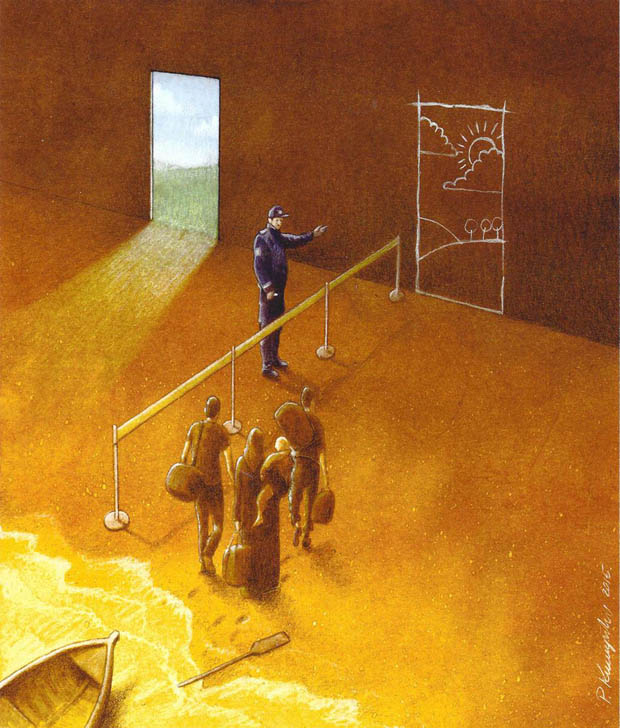 Rules for Exhibits:
1- Entries must be submitted in writing and addressed to
THE UNITED NATIONS/RANAN LURIE
POLITICAL CARTOON AWARDS
25 Columbus Circle
New York, NY 10019
(No phone or fax calls or Emails, please). Entries for awards must be received on or before November 15, 2016, and represent work done from the beginning of September 2015, to the 15th of October 2016, reflecting the importance of human dignity, mutual respect and friendship among nations, as well as economic consideration and environmental responsibilities towards each other. While cartoonists may send in what ever they please, the contest does not encourage maligning member nations.
Winning cartoons will be chosen for their high professional standards in art, political analysis of events, projection of events to come, humor, while also reflecting the spirit and principles of the U.N.
Entries for these awards may be made by any professional individual, and should consist of political cartoons printed in any publication published anywhere, in any language. The entry must consist of reproductions only. The cartoon reproductions will be accepted only as published, with name of publication, language, and date included, accompanied by a newspaper reprint, and translated into English. Exhibits are limited to two cartoons per person. Reproductions must be presented measuring no larger than 8,5 x 11 inches. Envelopes larger than 8,5 x 11,5 inches and that are thicker than one eighth of one inch will not be opened, and their entries shall not participate in the competition.
The entries should be sent in soft envelopes, easy to open.
The Committee requires that all entries conform to the stated limits and sizes before it can be given any jury consideration. All exhibits should include a biography of no more than 75 words long, be written in clear English, and a picture of the entrant.
All materials including prize-winning exhibits become the property of
THE UNITED NATIONS/RANAN LURIE
POLITICAL CARTOON AWARDS COMMITTEE
and will not be returned. Again: Only copies (not originals!) will be accepted for consideration. All material may be used for promotional purposes, including but not limited to inclusion in special United Nations albums or any other albums and/or exhibits.
The decisions of the judges are final and irrevocable.