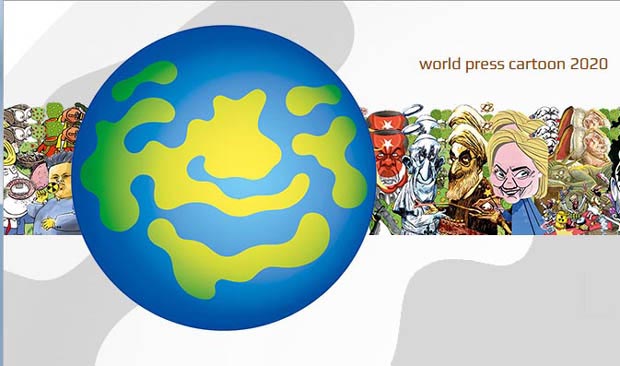 To distinguish, exhibit, promote and award the best drawings published in the world press is still our mission.

The Jury’s task is always hard: many works from various cultures and a growing quality.

To make judging easier and to guarantee the quality and rigour to the final selection, it is of the most importance that the authors read carefully the regulation and present their works in conformity with the rules it defines.

send your works, by ordinary mail, to:

if you use Express Mail, TNT, DHL, Fedex, UPS, send to:

b) The World Press Cartoon is not a thematic event. Its objective is to distinguish the best cartoons created and published in 2019.

c) In the category EDITORIAL CARTOON, all entries must represent events and issues that marked the news in 2019.

d) In the category CARICATURE, only works in the strictest sense of the term will be considered, i.e., exclusively humorous portraits.

e) In the category GAG CARTOON, the works to be considered will feature subjects that are not directly related to current issues.

f) Authors are free to submit what they consider to be their best work, although clearly those personalities, themes and events of a more universal nature will be best suited to such an international salon as the World Press Cartoon.

a) The exhibition of the selected works and the awards ceremony will take place in the Spring of 2020, at CCC – Cultural and Congress Center of Caldas da Rainha.

a) Only the originals of the works will be accepted.

b) Top quality printed versions of works produced by digital or mixed techniques will be considered originals when they are signed by hand by the author, who must indicate the techniques and software used on the competition application form.

c) The original files of works produced by digital or mixed techniques must also be sent, either on CD, DVD or flash drive.

e) Cartoonists are permitted to submit to the competition one original entry in each of the three categories of the salon: Editorial Cartoon, Caricature and Gag Cartoon.

f) It is an essential pre-requisite for eligibility that the works were originally printed between January 1 and December 31, 2019 in printed newspapers or magazines, published on a regular basis and on sale to the public, or in professional online publications of recognized journalistic nature.

g) As proof of compliance with the preceding paragraph, each original must be accompanied by the respective full page of publication, on which the date and title of the newspaper or magazine is clearly visible (note that cuttings, pasted versions, photocopies or digital prints of the publication are not acceptable).

h) In cases of online publishing, each high resolution original work must be accompanied by a CD, DVD, or USB flash drive with an active link, so as to allow a publishing view, active until 31 March 2020.

i) The author must attach the heading of the newspaper or magazine in which the competing works have been published, with size and quality that allows their reproduction.

j) If the original work appears with a title, caption or any other wording, these must be translated into English, to be clearly written on the identification label that will be sent with the original.

k) The works that compete in Caricature should mention the name of the caricatured ones.

l) The participating works should be received by the organization’s secretariat in Lisbon by January 31, 2020.

a) Participating works must be posted in flat packaging, between two hard boards.

b) On the packaging, clearly visible, the words NO COMMERCIAL VALUE should appear.

a) Each of the works for submission must carry an entry form and identification label, clearly filled in, and attached to the reverse side of the original.

a) The Jury of five members will be presided by the Salon director.

b) The WPC organization, under the management of the chairman of the Jury, shall select the original works to be included in both the exhibition and the catalogue.

c) It is up to the Jury the award of prizes and honourable mentions.

d) The decisions of the Jury will be taken by majority vote and will be final.

7. RETURN OF THE WORKS

a) All of the works which comply with the terms of eligibility will be returned to their authors, whether they are selected or not to appear in the exhibition, except for works that have won a prize or an honourable mention in the competition.

b) All exhibited works will be returned after the closure of the main exhibition in Caldas da Rainha and subsequent tour exhibitions.

c) Digital prints will not be returned.

d) The author must provide his/her full postal address as indicated on the application form, including street, town/city, postcode and country.

e) For purpose of works and catalogue expedition, Postal Office Box numbers are not accepted.

a) Authors whose works are selected to the exhibition will receive a copy of the catalogue.

a) The submission of a completed entry form and identification label will automatically imply the waiving of the author’s royalties vis-à-vis the non commercial reproduction of his/her work.

b) The awarding of a prize to a specific work will automatically imply the waiving of its author’s royalties to the organization of the World Press Cartoon.

a) The structure of the prizes will be as follows:

b) Chosen from all the entries in the competition, the World Press Cartoon will award the best work with the Grand Prix of 10 000 euros.

c) The Grand Prix winning work will be chosen from the three first-prize winners.

e) The prize values indicated above refer to gross amounts and therefore are subject to Portuguese taxation at the rate in force.

f ) According to the standard of the works submitted to the competition, the Jury reserves the right not to award prizes in every category and level indicated in the table above.

g) All the prizes will be authenticated with a diploma and the winners will receive a trophy.

h) The nine prize winners will be invited to attend the Awards Ceremony to be held in Caldas da Rainha in the Spring of 2020.

i) In addition, the Jury is permitted to select other works for the distinction of Honourable Mention, which will be symbolised by a medal and authenticated by a diploma.

j) All prize-winning works and those awarded honourable mentions become the property of the World Press Cartoon organization.

k) Every newspaper or magazine in which a prize-winning work was published will receive a diploma in recognition of the World Press Cartoon award.

l) Every artist whose work is selected to appear in the exhibition and catalogue will receive a certificate to mark the participation in the salon.