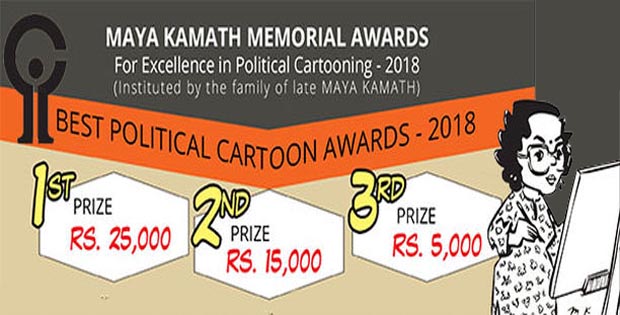 The competition is open to all Indian cartoonists. Participants can send a maximum of three political cartoons first published in the Newspapers, Magazines, News portals/Websites between January 1 and December 31, 2018. Cartoons published in regional languages should be accompanied by an English translation of the text. The date and the name of the Publication in which the cartoon has appeared should be furnished.

Best Foreign Cartoon Award-2018
Prize 1: $200
Prize 2: $100
Open to all non-Indian cartoonists. Other rules as above. All entries must be accompanied by soft copies of the cartoons published in the Newspapers, Magazines and News portals/Websites to be considered for the Award.

Best Budding Cartoonist Award-2018
Prize: Rs. 10,000
Participants aged 25 years and younger as on January 1, 2019 can send their published/unpublished cartoons and caricatures [maximum of six] along with copies of the publication in which these have appeared [if any]. Entries in regional languages should be accompanied by an English translation of the text.

Results:
Results will be announced in the first week of April 2019.
Award ceremony will be organised in May or June 2019, in Bangalore. The first 3 Awardees will be invited to Banglore to receive the Awards and given a citation along with a cash prize. An exhibition of select cartoons will be organised at the same time.

Rules and Regulations:
– Each entry should includea covering letter with the cartoonist’s full name, postal address, contact number and e-mail id.
– By entering the competition, the cartoonist represents & warrants that the work is an original work of the cartoonist & does not infringe on the rights of any 3rd parties.
– Further, the cartoonist provides Indian Institute of Cartoonists a limited, royalty-free, right & license to publish & publicly display the entries (whether or not winning an award) for non-commercial purposes such as for publicising the contest and the Awards.
– Entries will not be returned to the contestants & may be archived by Indian Institute of Cartoonists for record purposes.
– Any organisation may also nominate cartoonists for the Awards with their consent which shall include the consent to the conditions as described above.
– The decision of the JURY regarding the selection of cartoons for the Prizes is final.
—————
Indian Institute of Cartoonists
#1, Midford House, Midford Gardens,
Off M.G. Road, Bangalore – 560001 INDIA
Phone: 080-41758540,
Mobile:+91 9980 091 428